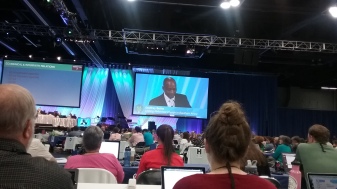 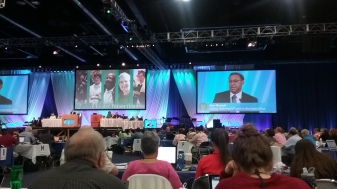 Rarely do we know we will be experiencing holy moments before they happen.  There are times when we know one is coming, a birth, a death, a hard conversation,  or a reunion.  But typically we stumble into the holy, those thin places between us and the Triune God; possibly even blundering our way in with no idea what awaits us.

Tonight was the final vote on accepting the Belhar Confession as a part of the PCUSA’s constitution.  Our constitution comes in two parts, the Part 1: Book of Confessions and the Part 2: Book of Order.  Part 1 is a collection of confessions of faith used over the centuries.  Each confession comes from a moment in history and was used, and still is used, to teach our faith.  Each confession informs our understanding of God’s action.  Part 2 is the collection of our form of government, directory or worship, and rule of discipline.  Part 2 is the part most people know the most about because it helps organize how we worship and work together.  Part 2 gets revised fairly often.  Part 1 has only eleven confessions; which means it does not get changed often.  In fact, to change Part 1 is a many year process because these confessions are part of our foundational understanding of what it means to be a part of a long tradition of the Church universal.

Tonight, we ratified the vote to accept the Belhar Confession as a part of Part 1 of our constitution.  The sentence is too bland for what happened.  After the vote was announced we heard from Godfrey Betha of Uniting Reformed Church in South Africa.  He spoke to us of how our acceptance of this confession which was written against the crimes in South Africa during Apartheid, was a long prayed for and worked for moment.  He was moved to tears, and I was moved to tears.  Then Allan Boesk of Uniting Reformed Church in South Africa spoke to us and he cried because he has been working on this confession since I was a child.  He has been working for decades to have it ratified by the PCUSA.  In that moment years of his work was affirmed.  I did not record his speech, but I know it has been recorded.  His refrain was, “I know, we shall overcome.”

We were propelled our feet, our hands clapping because noise needed to be made.  Our voices were raised in song, singing We Shall Overcome in many voices, so that we were not together, but stanzas apart, until from the platform our Co-Moderator began the call and response and we sang in one voice, hands clasped together and raised over our heads, tears pooling and spilling, and the moment was bursting with the power of the Holy Spirit.

Sleep well my friends, rest in the knowledge that God is indeed at work, and even when we are not looking, we can still stumble into God’s presence and be transformed.